How to wash plastic egg trays 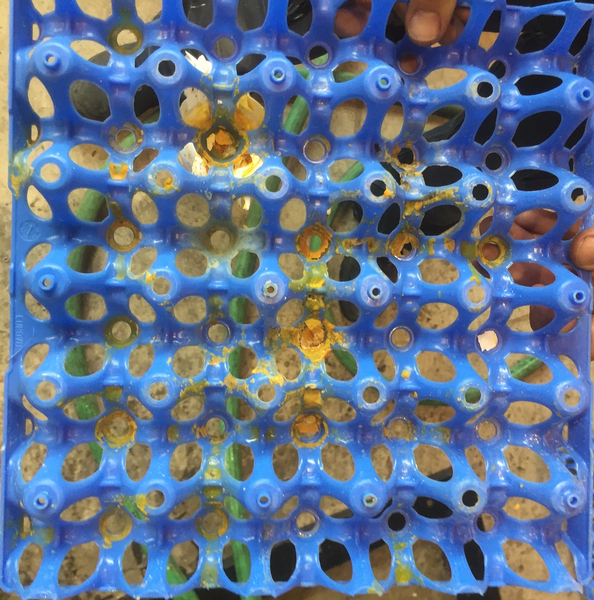 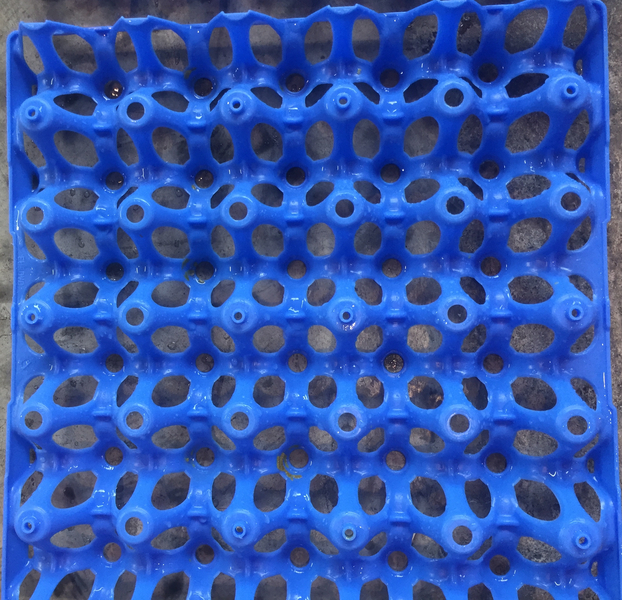 The rapid adaptation of reusable plastic egg trays for the transport of eggs is largely driven by consumer and market demands for a produce that is safe and of higher quality.  Egg producers/processors have also find out that the use of plastic egg trays, type Egg Cargo System, helps to increase the productivity of their grading, packing or breaking machines, reduces egg losses and reduces transportation costs.

When you use plastic egg trays you need to make sure that these trays are perfectly clean before re-using them. To achieve this result at the lowest possible costs you don’t want:

Triplelima provides industrial washing and robot automation equipment for the Poultry Industry and we advise you to invest on the UNIFORTES egg tray washer to achieve this objective.

This blog contains information on the features and benefits of the UNIFORTES egg tray washers.

Manufactured by
The UNIFORTES egg tray washers are manufactured in The Netherlands by a company whose CORE business is providing industrial cleaning solutions.

The UNIFORTES egg tray washers can be designed to work:

1) As a stand-alone unit

In this configuration the operator manually loads and off loads the trays. 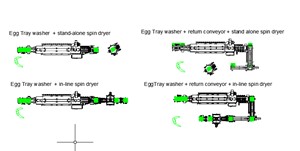 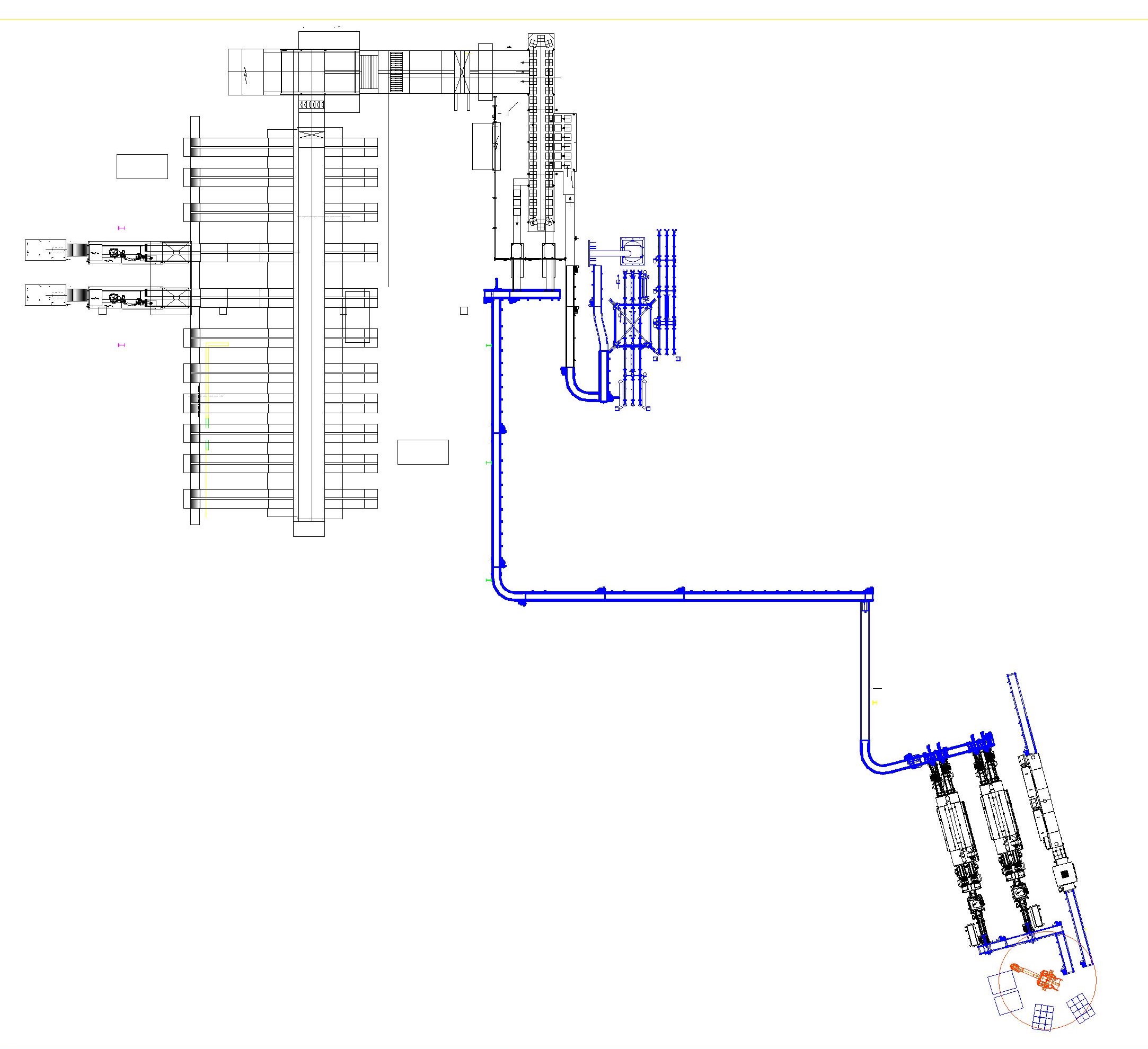 The UNIFORTES egg tray washers have no more than two washing lanes in order to allow the highest possible accessibility for optimal operation, maintenance and service.

Triplelima also supplies the necessary conveyors and robots to automate your washing operation.

The UNIFORTES de-nesters are designed to handle extremely dirty trays with the minimum possible stops.
This is one of the key factors that warrants the high effective capacity of the UNIFORTES egg tray washers. 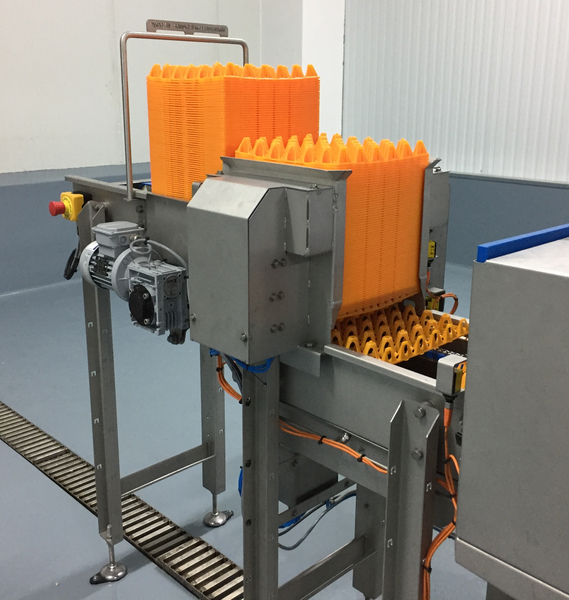 Cleaning egg trays is not easy. Egg yolk and egg white are very difficult to remove from plastic trays.
To warrant an optimal cleaning result the washing section of the UNIFORTES egg tray washers includes several features  that warrant a longer retention time and more effective cleaning effect of the spray washing system.
Other features reduce the time used to clean the spray systems and consequently improve the effective washing quality and capacity you obtain from the UNIFORTES egg tray washer. 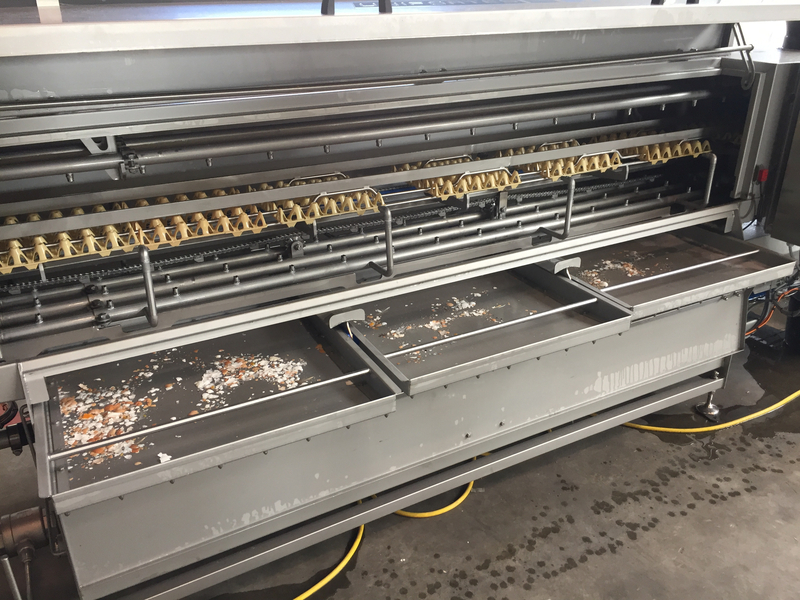 An optional feature is specially designed for washing the heavily soiled trays that are common in the egg industry. This feature warrants that you get perfectly clean trays without having to pre-soak them, run the trays more than once in the washing machine, operate the machine at slower speeds than its rated capacity, use higher energy costs to heat up the washing water and use higher amounts of detergents.

To heat up the washing water in the water tank you can choose one of the following 3 systems:

All UNIFORTES egg tray washers process the 30 egg trays individually (one by one) and not in a batch or stack, to warrant optimal cleaning and disinfection.

A correct rinsing of the trays, after washing, is very much advised for optimal cleaning and disinfection results. The UNIFORTES egg tray washers are therefore always supplied (standard) with a set of rinsing spray nozzles.

An optional unit to dose disinfectant in the rinsing water is also available. 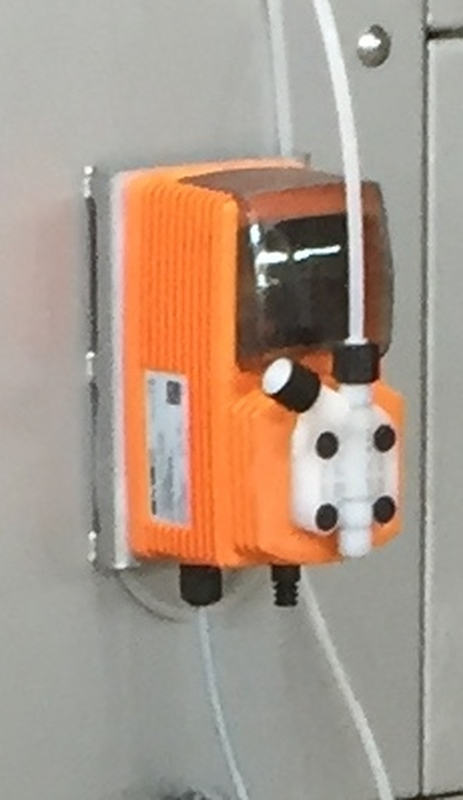 Attention: contact us for advice on how to rinse and disinfect the trays in a way that improves rinsing results, helps increase the drying effect on the trays and helps reduce water consumption and water heating costs.

Vapor is formed when washing and rinsing plastic egg trays with hot water and it should be removed from the washing area for a better working environment for the operators and the equipment. 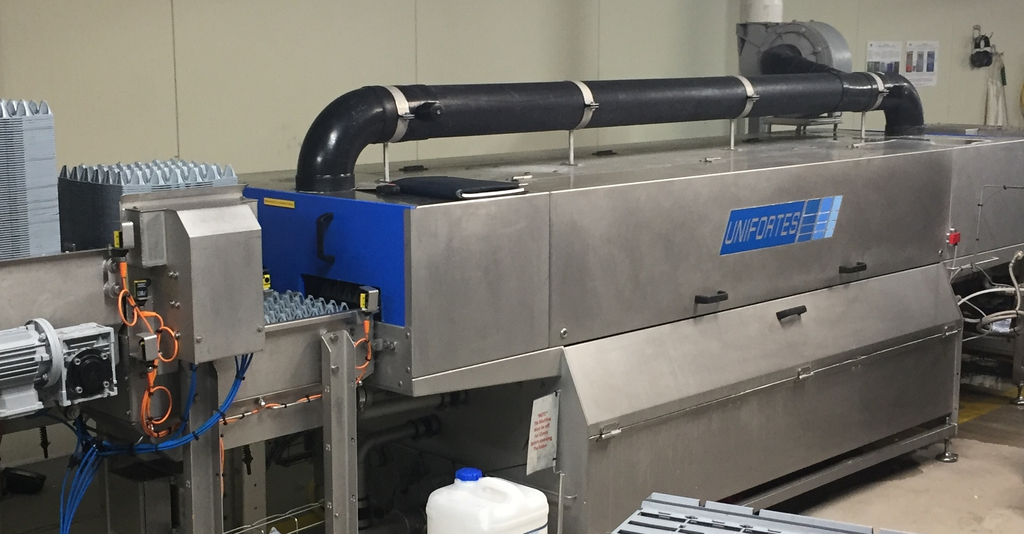 The UNIFORTES egg tray washers stack the clean trays according to the amount you pre-set, The number of trays per stack varies according to the type of trays you use. The open design of the tray stackers allows easy access for cleaning and maintenance purposes. 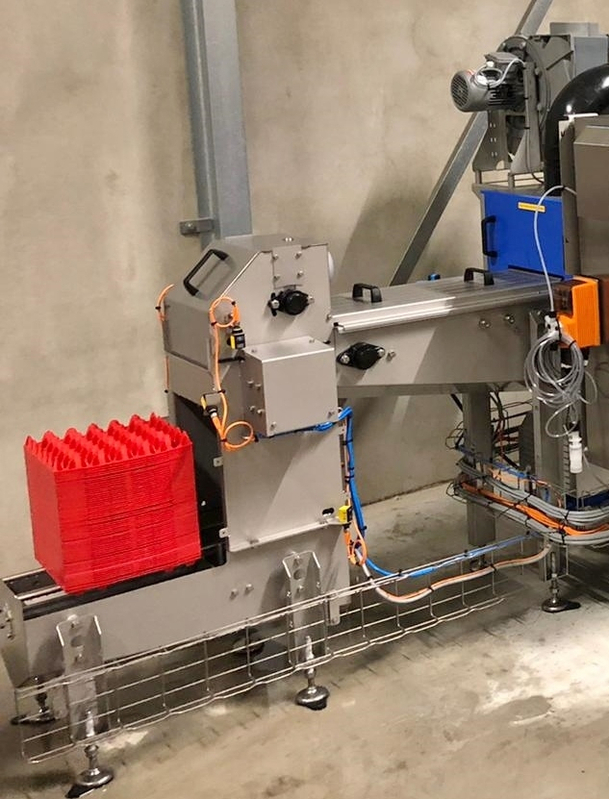 It is important to dry the clean trays, after washing and rinsing, to avoid mould formation. UNIFORTES egg tray washers can be equipped with two types of drying systems: 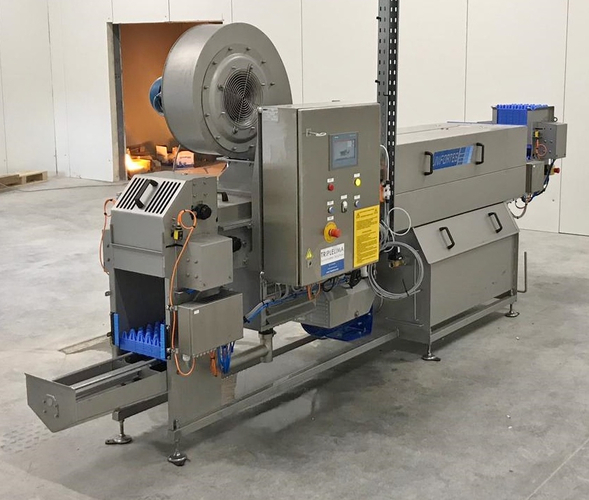 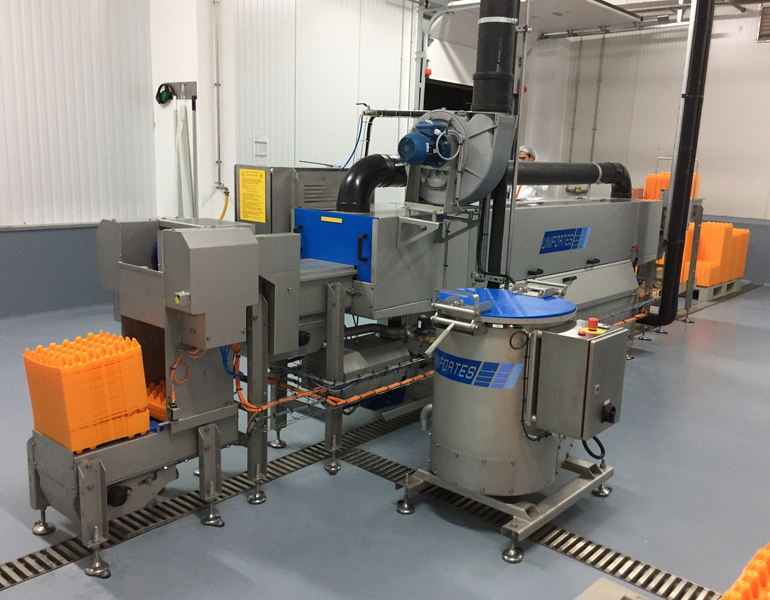 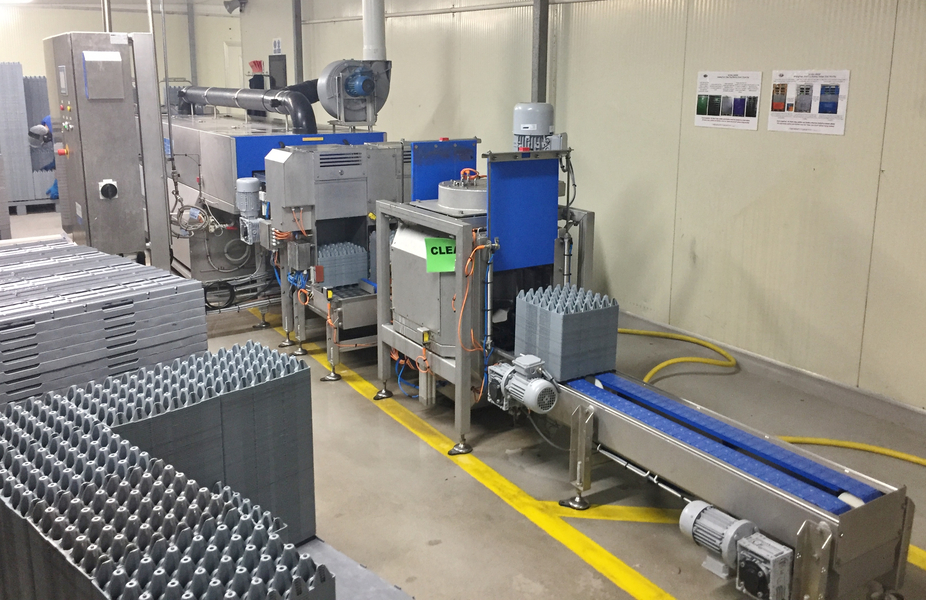 A control cabinet equipped with a touch screen with simple and comprehensive text allows the operator to make all necessary settings required to operate the unit and monitor its operation.

The UNIFORTES egg tray washer is a modular design that allows eventual future changes or up-grades, without having to invest in a fully new machine.

Is washing plastic egg trays a must?

Basically yes, so that you can help warrant the transport of the eggs in a healthy, clean surface, for food safety purposes.

How should I define the capacity of the egg tray washing machine I need?

There is not one only answer to this question but practical experience shows that the capacity of the tray washer should match the capacity(s) of your egg grader and/or egg breaking machine(s).
This way you can wash the trays at the same rate as they exit your egg grading/breaking units.

The advantages are:
. the heavily dirty trays are not yet stuck together, which allows for an easier de-nesting and consequent higher effective capacity of the tray washer
. the dirt on the trays is not yet “dried in” and therefore can be washed with less costs of water, detergent and energy used to heat up the washing water.
. you require a lower number of trays in stock, reducing your operational costs.

Can I install an egg tray washer directly in-line with my egg grader/breaking machine?

This is in many cases possible and advisable, but not mandatory.
It usually helps reduce your labour costs and utilizes the available area more effectively.

Does installing an egg tray washer directly in line, and in the same area where the egg grader is, affect the carton packaging used in the egg grader?

When it is done correctly there is no negative effect at all.

What are the basic steps of washing plastic egg trays?

Trays are manually or automatically loaded on the washing unit and then carried through the washing lane(s) where they are sprayed with water and eventually detergent.
After the washing section, the trays are conveyed through the rinsing section where clean, potable water is sprayed to remove eventual rests of dirt and soap still remaining on the trays. It is possible to add a disinfectant to the rinsing water for improved sanitation results.
Afterwards the trays are counted and stacked (manually or automatically) and dried.

Do we use detergent/soap to wash plastic egg trays?

It is not mandatory but mostly required to help warrant a correct cleaning effect.
One should try to reduce the amount of detergent used to a minimum, to reduce costs. We can help you with steps in that direction.

What is the best temperature of the water to wash the egg trays?

Basically hotter water cleans better than cold water, in a given period of time.
You should try washing with water at different temperatures to define the temperature that gives you the best result, bearing in mind the cost required to heat up the water. If you get good results with water at room temperature, do it. If not use hotter water but do not wash plastic egg trays with water at a temperature over 60°C. The hot water will “cook” the protein (rests of eggs) on the plastic trays instead of washing it off.

Is pre-soaking of the very dirty egg trays required for a better cleaning result?

Pre-soaking the egg trays sure helps the cleaning effect of the washing machine, but it is a costly, labour intensive, not so hygienic operation. We can offer you washing machines that are specially equipped to wash this type of egg trays, without having to pre-soak them.

Is rinsing of the egg trays really required?

It is not a must but we do recommend it. It helps warrant a perfect cleaning and disinfection of the trays. Otherwise there will always be rests of dirt and soap on these trays.

Is drying of the trays advisable after egg washing?

Yes, drying is advised to help prevent mold formation on the trays.

What is the best way to dry the washed egg trays?

The use of a spin dryer, operating stand-alone or directly in-lie is advised. In some cases drying by means of air can be effective enough.

Contact Triplelima for further information on how to wash plastic egg trays in the most cost effective way.